Love them or hate them, curved screens on smartphones are here to stay. But so far, Samsung is the only big brand that hasincorporated them into its flagship models. There’s no doubt that curved screens look cool, even if their utility is still being tested. For fans of used mobile phones, there are now a wealth of Samsung devices available that make use of this futuristic design trend. 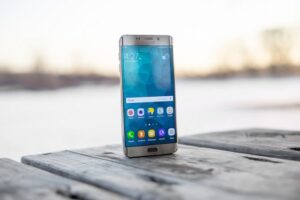 There is a deeper reason for this. Samsung loves its curved screens. And it also manufactures parts for Apple. Samsung appears to be sitting on its technology and denying other brands the chance to use it, and that’s likely to continue while it uses its OLED supply chain capacity for its own phones.

The first notable phone with a curved screen wass the Galaxy Note Edge, which had a curved screen, but just down one side of the phone. Despite lukewarm reception among reviewers, it proved that Samsung could innovate and produce a device that looked genuinely unique.

The S6 Edge took the curved screen one step further by putting a curve on both sides, and we’ve seen that look continue through to modern Samsung releases.

In contrast, Apple isn’t known for its daring design choices. So in that respect, it’s hardly surprising that it’s given curves a wide berth.

Samsung releases far more devices each year, and diverges far more in terms of design. Samsung also tries out far more ideas than Apple, thanks partly to its gigantic range of devices. Apple, in contrast, prefers to keep its designs relatively constant, whether users like it or not.

But here’s the killer. Samsung isn’t just the only company known for its curved screens; it’s arguably the only company that also has the expertise and capacity to produce them. Other manufacturers like LG do make OLED panels, but Samsung has more experience of producing screens at a smaller scale.

We probably won’t see Apple change the iPhone’s design in 2018. It likes to evolve its design very slowly, and isn’t known for jumping on design bandwagons.

Additionally, not everyone likes the way that Samsung has incorporated curved screens into its devices, and iPhones still offer consistency that some people value.

But Samsung’s way isn’t the only way, and we may see new takes on curved designs in the next couple of years as more manufacturers catch on to OLED. In the meantime, the situation benefits Samsung nicely. It can show off the tech on its own phones, and it can also afford to let Apple come around to curved screens in its own time.